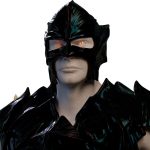 For years we were desperate to play a great EPICA Fighter online. We also hoped that, someday, a dev team would come along and transform this genre into a Full 3D experience with new mechanics and cool customizable features! But no one ever did. For years and years, Nintendo’s Smash Bros. series was the only decent set of games in this genre—ok, and Sony also made an attempt with PlayStation All-Stars....

Over all that time, various ideas for what would make an amazing game were percolating in our minds. Wouldn’t it be cool if....?! What if they could....??? Eventually, we started writing all this down to keep track.

There was never really a single point where we were slammed with an epiphany and thought, “Holy crap, we’ve gotta do this right now!” Our decision to build Killmaster didn’t come overnight or through some sudden vision. It grew gradually out of this desire to play a game we’d been contemplating for ages.

So when we finally decided to take the plunge and to make Killmaster, it wasn’t on a whim, and we didn’t just have one cool idea to base it off of. We carefully calculated the risks (as best as anyone can, of course!) We looked at the market and the growing need for this type of game. And we consulted our loved ones—there’s no way we could have set out on such a monumental endeavor without their support!

Finally, in August of 2015, our initial prototyping for Killmaster began. Looking back, we were incredibly naive! A very proud and green team of one! But we soon found our footing and increased in both size and experience.

Our first major step was deciding which game engine to use. At that time, the three most appealing options were Unreal Engine 4, Unity 5, and CryEngine. The choice basically came down to finding the best performing engine that would continue to offer support far into the future and would allow us the freedom to make the game however we wanted.

By 2015, CryEngine was a bit old and it had always seemed to focus on FPS style games. It was likely that a new engine would come out soon, leaving the current engine to rot away without future updates. Plus, we wanted to make a fighter, not an FPS. So we took a pass.

So then the question became one that rages on among developers to this day: UE4 of Unity 5?!

Unity had the benefit of a relatively modest learning curve. And despite a common misconception, its graphics were nothing to laugh at! Also, at that time, Unity had a much larger marketplace than UE4’s and was full of pre-made assets of all kinds. So in terms of just getting started and cranking the game out, it would have been the best choice!

UE4, on the other hand, was notoriously hard to learn. Even for Devs of the previous engine (UDK), UE4 had so many new and entirely reworked systems that it was practically like learning a new engine. This resulted in a dearth of instructional materials, since there were really no “veterans” of the UE4 community that could mentor newcomers.

But UE4 did outshine its competition in many ways. First, it implemented a robust “visual scripting” system called “Blueprints” that opened up its development to non-programmers. No longer did you need to be an expert coder to create a game! Not only that, but Blueprints sped up iteration times immensely. Rather than combing through lines of code, you could easily “see” everything that was happening.

Also, in our humble opinion, UE4’s graphics were far better out of the box than Unity’s. That’s not to say that Unity looked like crap—it didn’t! But it seemed that UE4 had a strong advantage in this field.

But most importantly, UE4 offered the most abundant features with the greatest control. Sure, that made it almost impossibly hard to get started, but it also offered the chance to create the exact game we wanted to make! So we hardened our resolve and decided to master UE4 in order to achieve our true vision for Killmaster.

Ok, great, so we’ve chosen to work in UE4 and have begun learning it inside and out. The hard part’s over, right?! Not so fast! We’re still a one-dev army, and now we’re starting to have an identity crisis.

Who are we? What’s the name of our game?! We want to tell others about us, and we need to find experienced artists to help out. So how do we introduce ourselves??? And are there really any decent names left on the internet?!

It actually took several months to decide on our name. At first we were somewhat passive about it, thinking that we should keep working on the game until we’d solidified the concepts, story, and characters enough to come up with something organically. But nothing sprouted! So we started taking more active steps to find ourselves.

We can’t even list all the things we tried! We tried variations of “Battle Royale” (before this became the popular shooter format) and tons of other similar names. We tried making it personal, like something that was important in the game itself or in our own lives. Nothing worked!! Whatever we came up with was trite or arcane—nothing that could describe us at a glance.

Finally, we settled on a name that had been dear to us for many years (one we were a little embarrassed to use because it had been the Gamertag of our founder for ages). If you need us to tell you that we ended up using “Killmaster,” then you’ve not been paying attention! But wtf is that?!

Great that you asked! The name “Killmaster” comes from a medal you could win in Perfect Dark (Nintendo 64) during multiplayer matches. This medal signified that you had earned the most kills in the match—a most coveted prize indeed! But beyond its sentimental value for us, this name also just seemed to fit with our philosophy—we like killing things. It’s an art form. And it takes commitment to hone one’s skills into mastery.

And rather than dawning a separate name for our studio, as most others do, we decided to make the name of our game a part of who we are. After all, Killmaster is the only game we are working on, and we intend to continue developing it for as long as we still have fans who want to play it!

It was lonely for the first few months. Prototyping alone, struggling to figure out UE4 alone, and wondering who would join us...alone! How in the world could we enlist talented artists to our cause?!

Also, for us, finding the right team was about more than just experience, availability, and interest. The biggest question was: “Do we have the money to hire all these people?!” And if we could miraculously find amazing artists who happened to be interested in the game and were also affordable, how do we set that up? As part-time freelancers or as full-time employees?

We had to take into account several considerations. First, with our limited budget, we were likely capable of hiring just one person full-time or a handful of people part-time.  Second, we had no office space (all work up until this point had been done at home). And renting / buying office space would have been a huge investment—one we couldn’t afford. Third, freelancers can come from anywhere in the world, so we wouldn’t be limiting our search to local talent. And freelancers tend to have more competitive prices than full-blown employees, who will usually also require a benefits package. On the other hand, we would have far less control over a freelancer’s schedule and day-to-day work product, since they often have multiple clients at any given time. Finally, we considered our timeline. A full-time employee could work 40 hours per week. A freelancer would have varying hours and, depending on the person / arrangement, may not even contact us for a couple weeks at a time.

All of this was very difficult to calculate, but in the end we realized that we didn’t really have a choice. We weren’t able to hire anyone as a full-time employee, because we needed several specialized positions filled: 2D Concept Artist, 3D Character Modeler, Character TD (Rigger), Animator, UE4 VFX Artist, Programmer, etc. So unless we could find a Jack-Of-All-Trades, there was no way that would work!

So then how did / do we go about assembling the best team ever?! Well, for anyone stuck in this same situation, we highly recommend searching hangout spots for artists, like Artstation.com. That’s basically where we started.

We didn’t have any artwork at first. Just concepts in our mind. So we started by searching for artists whose work really stuck out to us and matched our overall themes. Basically, we wanted to cross the uniqueness and personality-infused style of Blizzard with a more realistic feel.

And we were lucky! Because over the next two years we filled the team with some truly amazing artists who are not just talented and professional but who are truly good people! Everyone hears the horror stories. A freelancer does all their work but doesn’t get paid; or a developer makes a down payment, never to hear from the con-artist again! And this made us very skeptical at first. But thankfully, we have been so fortunate to work with some of the most amazing artists across the world!

So after nearly 3 years of development, we are finally able to reveal Killmaster to the masses! But what can we reveal?! What’s actually in the game, and can it even be played?

Yes, the game is playable, but at this state it isn’t ready to be fully shown off. And that’s because we still have a lot of work left to do on VFX and the backgrounds for each Arena. If you’ve had a chance to look at our screenshots for the Arenas, you’ll notice that they seem rather bland.... That’s because our focus right now is on making the playable areas balanced and fun. But after we’re satisfied with that, we’ll begin polishing up the rest to make each Arena engaging and gorgeous!

That being said, we will be uploading short videos to YouTube over the summer to show off some Attacks and gameplay, so please DO hold your breath! ...go ahead, keep holding 😉

For now, though, everything we’ve revealed in the “Revealed Content” section of this website is already in the game. Of course, there are many other features already in or partially in—but we’re not ready to reveal those yet, so you’ll just have to wait 😉

However, we do have some more info on things we’re currently working on plus future plans. You can find these in the other sections of this Topic, so please check those out as well!